The Library of Congress, WASHINGTON DC

Posted by markomundo at 2:27 PM No comments:

Sent to me by a Postcrossing member.

Sent to me by a Postcrossing member.

This is a postcard I received from a Postcrossing member.

Posted by markomundo at 2:49 PM No comments:

In the 1900's Andrew Carnegie began giving his money to towns for libraries. Local civic leaders requested and were given a Carnegie grant of $15,000. Sarah Dayton gave the city the lot on the corner of 6th and Main. In 1903 the Carnegie-Dayton Free Library was dedicated. This library had many additions and renovations and served the community until 2004 when it was demolished. [SOURCE]

Posted by markomundo at 2:35 PM No comments:

THE HISTORY OF MARYHILL MUSEUM OF ART is inseparable from the life of its founder, Samuel Hill. Born in 1857 in Deep River, North Carolina. [Source: The History of Maryhill, http://www.maryhillmuseum.org/history.html]

Posted by markomundo at 2:29 PM No comments:

1877: John Day Ferguson leaves a bequest of $10,000 to aid in the establishment of a public library on the condition that fellow citizens donate $25,000. [Source: The Ferguson Library at 125 years, http://www.fergusonlibrary.org/about_us/history/history.html]

The building is a stately looking brick structure with antique stone trimmings. It is “of the colonial style of architecture and has a handsome portico supported by four magnificent Ionic Columns. A. H. Kipp of Wilkes-Barre was the architect.” [Source: History of the Spalding Memorial Library, http://www.spaldinglibrary.org/history.htm]

Posted by markomundo at 2:10 PM No comments:

Shortly after the College of Emporia was founded in 1882, Colonel John Byars Anderson of Manhattan, Kansas donated his collection of books. In the spring of 1888, on the occasion of Col. and Mrs. Anderson’s 50th wedding anniversary, the collection and other gifts of books were officially designated the Anderson Memorial Library. Twelve years later, the Carnegie grant was received to build a library building. [Source: The Carnegie Legacy in Kansas, http://skyways.lib.ks.us/carnegie/updates/esu.html]

Posted by markomundo at 1:59 PM No comments:

In 1815 a "Social Library" formed, that was then chartered by the Legislature in 1818. In 1819 the collection totalled an overwhelming 205 volumes, which were transferred to the Natural History Society in 1850. In 1855 the Library Association took over the books and incorporated 2000 volumes. On April 14, 1862, the volumes were transferred to the city for a Free Public Library. And August 20, 1862, an ordinance was passed for the establishment of the Library, which was located at the corner of Market and Tremont Streets.
[Source: http://www.noblenet.org/lynn/about.html]

Posted by markomundo at 2:24 PM No comments:

Handley Trustees hired architects Stewart Barney and Henry Otis Chapman of New York who designed the building in Beaux-Arts style. The final cost of the building and furnishings in 1913 was $233,230.28. Five Reproductions of Architectural Drawings, ca. 1906, of The Handley Library are available for purchase, click here!

This card, commonly referred to as an "undivided back" postcard, was published c1910 by The Metropolitan News Co., Boston, Massachusetts. It was printed in Germany.

SAR Academy is a coeducational, private Modern Orthodox Jewish day school. The school is located in the Riverdale section of the New York City borough of the Bronx.

Webpage for the Hepburn Library, Colton NY
[NYS0774]
Posted by markomundo at 1:50 PM No comments:

On 1 February 1911, Louise wrote: "Dear Sister, Have received your letter and will try to answer it soon we are all well and busy as bees. I'm trying to do some sewing. How are you all? Pete is here now. Love to all."
Sioux City IA Public Library Webpage
Cuil search results for Public Library Sioux City IA
Posted by markomundo at 1:37 PM No comments: 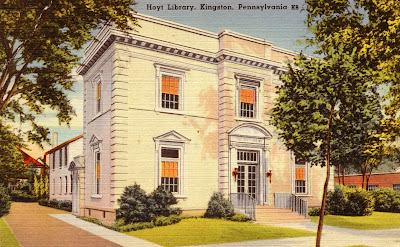 The Hoyt Library had its official opening on January 2nd, 1928 to begin a tradition of service to all of the Wyoming Valley and its people.

A prominent citizen and businessman, Frank Weston Hoyt, bequeathed the family homestead to the Municipality of Kingston for the express purpose of establishing a Library on the West Side of the Susquehanna River. People on the west side of the river certainly were interested in a new library which would be more accessible to them; but, Kingston officials were totally unprepared for the enthusiasm demonstrated on that cold morning in January. When the doors of the Library were opened for the first time, hundreds of people were waiting in a line that extended from the entrance to encircle the entire city block.

[History of the Hoyt]

Posted by markomundo at 4:16 PM No comments:

Posted by markomundo at 4:12 PM No comments:

The Charles Deering Library opened on January 3, 1933 and served as Northwestern University's library until 1970 when the new, main library building was completed.
The Deering Library was designed by the renowned architect James Gamble Rogers who also designed the South Quads, Dyche Stadium, and Scott Hall on Northwestern's Evanston campus as well as most of the buildings on the University's Chicago campus. Rogers also designed numerous other academic buildings including the Harkness Quads and the Sterling Library at Yale.
[Read more]
Posted by markomundo at 4:04 PM No comments:

The Bloomfield Public Library has been serving the community for over seventy years. It all began in 1902, when James Newbegin Jarvie, a prominent Bloomfield businessman, founded the Jarvie Memorial Library at Westminster Presbyterian Church, in memory of his parents. In 1923, he offered the library, it's collection and equipment to the town, along with $60,000. The library did a great deal of moving around until the Board of Trustees purchased the land at 90 Broad Street for $23,000. John F. Capen, a local architect, was commissioned to draw plans for the 17,000 square foot colonial brick building which finally opened to the public in March, 1927. [Mission and History of the Library]

Posted by markomundo at 3:21 PM No comments:

The New York Public Library (NYPL) is one of the leading public libraries of the world and is one of America's most significant research libraries. [Wikipedia]
Posted by markomundo at 3:15 PM No comments:

Elbert Ivey Memorial Library was officially closed November 30, 1997, and a gala donor dinner and grand opening were held in January, 1998 for the Patrick Beaver Memorial Library.
The History of the Hickory NC Library.
Posted by markomundo at 3:11 PM No comments:

Sent to me through Postcrossing.
Posted by markomundo at 2:56 PM No comments:

The origins of the Kalamazoo Public Library were humble. In 1860 the local school district inherited 123 volumes from a failed township library. With that tiny collection, a library was opened for a single hour per week, its use limited to students of the school district and their parents. It grew through the Civil War years until it had 2,800 books, and opened to the general public on 12 October 1872. From that modest beginning, Kalamazoo Public Library has continued to grow until it now offers 120,000 people almost 400,000 books and a variety of other media from five buildings. The library continued to function under the direction of the board of education for more than a century until 1990, when voters agreed to form a district library which would function under its own board of trustees.
[http://www.kpl.gov/local-history/library/history.aspx]
Posted by markomundo at 1:42 PM No comments: