Posted by markomundo at 2:28 PM No comments:

In 1926, the Board of Trustees recognized the need for a larger library and assembly hall. A resolution was made to name the proposed building in memory of Amos Eaton. The library was built to accommodate 160,000 volumes and 240 readers. The auditorium could accommodate up to 1400 people. The building, another Lawler & Haase design, was opened in 1928.

The library remained in Eaton Hall until it was moved to the former St. Joseph's Chapel in 1960. Auditorium space was eventually converted to lab, classroom and office space. Amos Eaton Hall was remodeled in 1965 and currently houses the Department of Mathematical Sciences. [Source]

Posted by markomundo at 2:21 PM No comments:

Posted by markomundo at 2:12 PM No comments:

Gorgas Library is named after Amelia Gayle Gorgas, who was University of Alabama's first female librarian and served the University as hospital matron, librarian, and postmistress for 25 years until her retirement at the age of 80 in 1907.

The main steps to Gorgas Library from the Quad cover the ruins of the antebellum library that was burned during the Civil War. Website for this library.

Posted by markomundo at 2:06 PM No comments:

1884
After the Ontario government passed legislation to permit municipalities to establish free libraries, the Mechanics Institute was dissolved and re-established as the Brantford Free Library on March 4, 1884. James Horning was chosen as the first permanent librarian (he held this post until his death in 1901). The first library board was: Rev. Dr. William Cochrane (Chairman), James B. Woodyatt, Wm. Watt Sr., Rev. Dr. Mackenzie, Dr. Kelly, Rev. Maxwell, Rev. Father Lennon, D. Hawkins, and Col. S. C. Jones. [Read more of the history of this library, click here]

The Redwood Library and Athenæum is the oldest lending library in America, and the oldest library building in continuous use in the country. Founded in 1747 by forty-six proprietors upon the principle of "having nothing in view but the good of mankind," its mission continues over 250 years later. [Read more, click here]

Recognizing the need for a permanent home, the first librarian, Mrs. Helen Carey, contacted Andrew Carnegie in January 1903 to request a grant of $17,500 to build a library. Within three weeks Mrs. Carey had his commitment. The new library opened September 1, 1905 at its present site, on land donated by the board of education. In 1931, the Carey Memorial Reading Room was added to the library, and in 1984, a $1.2 million expansion and renovation project was completed. [Read more about the history of this library, click here.]

History of Salem and the immediate vicinity, Columbiana County, Ohio

Three views of the main library built in 1986, Reima & Raili Pietilä, architects. Sent to me by my Postcrossing friend, Risto.

In 1978 a competition was arranged for the design of a new main library. The jury unanimously chose Raili and Reima Pietilä´s work "Mating Call".

The architects said they had been influenced by various elements, such as Celtic ornaments, sheep horns and glacial spin formations. The constructional basic idea was space coiling spirally like the shell of a snail. The form of a bird appeared in the design process. Increasingly, the building began to resemble a large game bird - capercaillie. In fact, the library is known under the Finnish name "Metso". Seen from above, the building looks like a bird carrying a shield. [Read more]

Posted by markomundo at 1:26 PM No comments:

By 1898, the collection consisted of 5,000 volumes supervised by Adele Barnum, the first paid librarian. Growing pains continued and, by 1901, Niagara Falls Power Company Director William B. Rankin came to the rescue by securing a $500,000 grant for a library building from Pittsburgh Steel magnate Andrew Carnegie. A site at the corner of Main Street and Ashland Avenue was chosen, and in 1904, the library moved into spacious new quarters with marble floors, brass fixtures and room for 13,134 volumes. Read more about the history of this library, click here.

Posted by markomundo at 9:35 AM No comments: 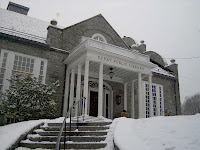 A vintage postcard view and a contemporary view. The building appears to have been modified. 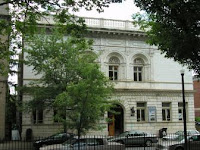 A vintage post card view and a contemporary view.

Posted by markomundo at 8:05 PM No comments:

Bolton Public Library's building was the gift of Misses Emma and Anna Whitney in honor of their father Captain Joseph Whitney. Its native stone and tile exterior, arched windows, and oak-paneled Gothic interior lead some visitors to guess that it was once a church; in fact, it has always been a library. The building was formally dedicated in 1904. [http://www.boltonma.us/library.php]

Published by the Metropolitan News Co., Boston, MA and Germany, no. 7786

"The Dawes Memorial Library, completed in 1961, perpetuates the name of a distinguished family with a long record of devotion and service to the College. The three-story building, which seats 535 and houses 136,000 volumes, is completely air-conditioned."

This card was published by Curteich and is numbered 6DK-1442.

The doors officially opened to the new 53,000-square-foot Legacy Library (pictured above on the bottom) when students returned from their winter break Monday, after a year-and-a-half of construction and more than a decade of plans and dreams.

The new facility's predecessor, Dawes Memorial Library, was built in the early 1960s and demolished in May 2007 to make way for the new library. Dawes had problems with leaks, ventilation and space.

Israel Crane and his wife invited friends and neighbors to organize a subscription library collection of about one hundred books. There were 30 participating families. The collection was housed under the counter at Betzler's Drug Store on Bloomfield Avenue (then called Main), near the Presbyterian Church (now the site of the Hinck Building). The books were moved to the Pillsbury Building, also located on Bloomfield Avenue, and the library obtained a charter as the Montclair Library Association. Read more about the history of this library click here!

Mosaic Mantel by Frederick Dielman. Representatives' Reading Room. HISTORY: In the center stands the Muse of History with recording pen and gold-clasped volume. In the panels are names of great historians: Herodotus. Thucydides. Polybius. Livy. Tacitus. Baeda. Comines. Hume. Gibbon. Niebuhr. Guizot. Ranke. Bancroft. Motley. On the left side sits Mythology with recording stylus and globe symbolic of the myths of the worlds. Beside her are a winged Sphinx and Pandora's box. On the right is the venerable figure of Tradition, and by her with a lyre sits a youthful poet who will sing the story that she tells. In the distance back of Mythology rise the Pyramids, back of History the Parthenon, and beyond Tradition the Colosseum. - From Practical Guide Library of Congress 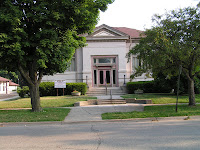 On March 7, 1892, the Fortnightly Club, consisting of “civic- minded ladies,” established a book collection for its members. In November 1896, this collection was opened to “a limited number who shall be called Library Members.” The Y.M.C.A. also sponsored a reading room, but it was not until April 1900, that Miss Lillie R. Gilliland attempted to organize a library. She established a circulating library, called the Arkansas City Library, and it was situated in the Commercial Club Assembly Room. It had 75 members who paid $1.00 each for a membership fee. The collection consisted of 500-600 volumes. At the end of the year the Commercial Club “failed to vote any help for the Library,” and Miss Gilliland gave away or sold the books at this point. To read more about the history of this Carnegie Library, click here! 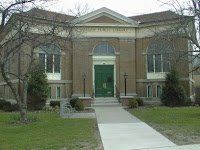 The best account of the Library's nineteenth century beginnings can be found in Judge William B. Stevens' History of Stoneham (1891). Ironically this is the same Judge Stevens who, while lavishing praises upon the Library's first proponents, chaired a committee that
issued a minority report urging the people of Stoneham to turn down Andrew Carnegie's 1903 offer of funds for the construction of what today is the oldest part of the plant. The history of this library is available here in PDF.

According to a New York Times article 25 June 1900, the cornerstone of the library, located at Main Street and Essex Avenue, was put in place by JW Stickler, who is erecting the library as a memorial to his son. The new library would cost in the neighborhood of $100,000 (about $2,645,000 in 2008 dollars).

Posted by markomundo at 3:26 PM No comments: