The digital postcard images sponsored by the Joplin Library site show the development of Joplin from a scattering of rough mining camps through the mid-point of 20th Century. They provide an indelible image of a city that grew virtually overnight to become the world's premier supplier of lead and zinc ore. Interested in postcards? Check out the Joplin Library's collection!
Posted by markomundo at 9:04 AM No comments:

The original library in Lewiston was called the Manufacturers and Mechanics Library and was housed in the city building . Andrew Carnegie donated the money for the granite building in 1902 with the understanding that the city would fund staff, books, and materials for the operation of the library. Granite from North Jay and Norridgewock was used for the construction. The vestibule was modeled after the Greek design with columns 18 feet high and 25 inches in circumference. Fine oak woodwork is found on the fireplace mantels and oak pillars. {Thanks to the Lewiston Public Library, http://lplonline.org]
Posted by markomundo at 3:31 PM No comments:

Email ThisBlogThis!Share to TwitterShare to FacebookShare to Pinterest
Labels: Carnegie, Lewiston, maine, ME 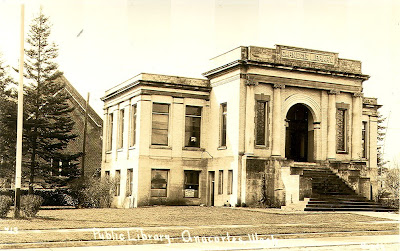 The Carnegie Gallery was originally designed as a Carnegie Library and was built between 1909 and 1911. It became the home of the Anacortes Museum in 1968, and in 1977 was listed on the National Register of Historic Places. Architect, builder, or engineer: Piper & Cox

Anacortes Illustrated. Containing a General Description of the State of Washington and a Review of Resources, Terminal Advantages, General Industries and Climate of Anacortes and Its Tributary Country. Cover title: Anacortes. Illustrated. Washington.

Posted by markomundo at 3:17 PM No comments:

In 1903, the Library changed its name, and received a new charter as the Ossining Public Library. Beginning at that time, the Library moved its location several times as the book collection grew in size. From the Park School, the Library went to the Twiggar Building on Main Street, and then to the YWCA a few years later. Looking for a permanent home, the Trustees wrote a letter to Andrew Carnegie to ask him for funds to build a new library. He pledged $26,000 for a building if the Trustees could provide the site and commit to an annual budget of at least $2,600 per year. The Trustees purchased the present site on Croton Avenue, known as the George Selleck property, and the library was dedicated in March of 1914. A newspaper at the time boasted that there was not a village of equal size in the State with a finer library building. [Thanks to the Ossining Public Library www.ossininglibrary.org]
Posted by markomundo at 3:01 PM No comments:

The library was designed by architect J.E. Clancy and opened April 15, 1902.
Posted by markomundo at 1:52 PM No comments:

Posted by markomundo at 1:40 PM No comments:

Located at 291 Main Street, it was built in 1902 as a gift from Andrew Carnegie.
Posted by markomundo at 9:37 AM No comments:

Posted by markomundo at 9:28 AM No comments:

The "old" library is located at Union and Seward Streets. The land was bought with a $15,000 gift from General Electric. The building itself was funded by a $50,000 gift from Andrew Carnegie. It was opened on October 6, 1903. At the time there was concern that it was so far out of town that people would not be able to get there and it might even be unsafe.

The building followed the basic design of the Carnegie libraries throughout the northeast. Note the names of famous writers carved along the upper part just under the roof. Many patrons remember the glass balcony in the main part of the library, which also was part of many Carnegie libraries. The building is currently used as a dormitory for Union College.[Thanks to I Spy in Schenectady www.mvls.info/ispy/schenectady/sch_site03_hist.html]

Posted by markomundo at 9:00 AM No comments:

Gardiner Place, showing the Library and Post Office.
Posted by markomundo at 8:55 AM No comments:

Homer is still using this building as a library. George Phillips, a resident of Homer, decided in 1900 to help provide the community with a library. Providing $50,000, Phillips hired Archimedes Russell, a Syracuse architect, to design the building and construction began in 1902. The building was finally finished and opened to the public in 1903. [Thanks to the Phillips Free Library]
Posted by markomundo at 3:40 PM No comments:

In 1913, a Carnegie grant of $12,500 made possible the construction of the main library at Kenwood and Fifth (Harvard Street). The building was completed and dedicated November 13, 1914. [Thanks to the Glendale Public Library]
Posted by markomundo at 3:35 PM No comments:

Pub. by Tichnor Bros., Boston, MA
Posted by markomundo at 3:13 PM No comments: 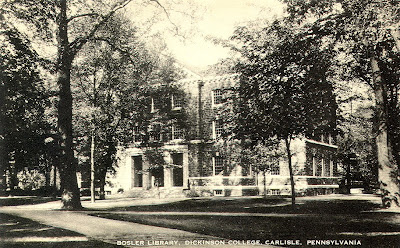 [LIB3713] Special Collection: The Dickinsonian The Dickinsonian, student newspaper of Dickinson College, began publication in 1872. This digital collection includes images of the newspaper from 1872 up through 1994. While the text of the papers is not keyword searchable, blog-style entries have been written that summarize each individual issue, and tags have been assigned to help identify key people or events reported in that issue. Each entry includes a small image of the front page for that issue, and clicking the image will lead to full-size readable pages for that particular issue. [Website]
Posted by markomundo at 3:07 PM No comments:

Another use for a Carnegie Library

Thanks to the Spokesman-Review for this story:

Carnegie library will be hotel company’s headquarters - Magnuson Hotels will move into its new Spokane (WA) headquarters in the former Carnegie library at 525 E. Mission Ave. today. Some of the architectural features have been preserved and the integrity of the building has been respected. You can read the entire story here.
Posted by markomundo at 12:59 PM No comments:

Thanks to MyCentralJersey.com for this story:

Campaign under way to repair, renovate Perth Amboy's landmark library - About $9 million is needed to repair and renovate the city's 106-year-old library - funds the cash-strapped city doesn't have.

The city is partnering with Celebrate Perth Amboy, a nonprofit organization that has been active in Perth Amboy for more than 20 years, to raise funds to restore, renovate and extend the historic Perth Amboy Public Library.

The Library was built in 1901 with funds from the Andrew Carnegie Foundation. Opened in 1903 the building is structurally sound. The library is not on the New Jersey or National Register of Historic Places. Kubulak said that designation could help with fundraising efforts.

Anyone interested in becoming a members of Celebrate Perth Amboy/Save Our Carnegie Library or would like to participate in the fundraiser is asked to e-mail celebratepa.library@gmail.com.
Posted by markomundo at 12:50 PM No comments:

"David Lipscomb College, named in honor of B.A. Crisman of Chattanooga, and his brother, the late Oscar Crisman, formerly of Chattanooga, who made substantial contributions to this building. The quiet reading rooms provide excellent places fro Lipscomb students to study." [from the back of the card]
Posted by markomundo at 9:27 AM No comments:

Old library undergoes renovations This great story out of Greenwood MS, thanks to The Greenwood Commonwealth:

The old Greenwood-Leflore Library building is in the midst of being renovated. The historical library, which is owned jointly by the city and Leflore County, is located on West Washington Street. The only Jacobethan Revival-style library in the state, it was built in 1914 with funding provided from a Carnegie Library Grant. In 1955, work was completed on an addition designed by architect R.J. Moor, which blended with the library’s original architectural style. Read the article here (includes photo).

Hats off to County and city officials for saving instead of demolishing!
Posted by markomundo at 10:42 AM No comments:

The Crunden Branch Library, Saint Louis, Missouri? A sad tale of the life and times, and ultimate demolition, of this Carnegie library can be found at the Ecology of Absence site. The story begins, as so many of the Carnegie library stories do, in the early part of the 20th century.

The story also seems to parallel the story of St. Louis and what is valued by its government. Photos accompany the story. Be sure to read this very rich commentary. It could happen in your city or town. Read the story here!
Posted by markomundo at 11:07 AM No comments:

The Carlsbad Public Library has been serving Carlsbad and the surrounding communities for over 100 years.
Posted by markomundo at 4:21 PM No comments:

The Cotuit Library was founded by the Cotuit Lyceum Society. Its first permanent home was in the present entrance room, a former school house built in 1820 and acquired for the library in 1894. Through the years the following expansions have allowed the collection to grow: the Guy Lowell addition in 1901, the Richard Gallagher addition in 1963, and the Kirkman Extension (Phillip Minervino, Architect) in 1977. [Thanks to the Cotuit Library, www.library.cotuit.ma.us]
Posted by markomundo at 3:38 PM No comments:

The Company of the Redwood Library was established in 1747 by Abraham Redwood and a group of his friends and associates. One of the country's earliest "public" libraries -- that is, open to the public though not "free"--Redwood is the oldest surviving lending library in the country. Redwood remains a "membership library" (open to the public) supported by Proprietors, who own shares and pay an annual assessment, and Subscribers, who pay fees. The Original Collection of 751 titles has grown to a collection numbering more than 160,000 volumes. [Thanks to the The Redwood Library and Athenæum, www.redwoodlibrary.org]
Posted by markomundo at 3:02 PM No comments:

Bethany, a small college of national distinction, was founded March 2, 1840.

Now known as Cramblet Hall, and originally Carnegie Library, it is a three-story brick building with Berea stone trim. The brown-pressed brick was made on the grounds, and face brick and slate were hauled from Wellsburg, West Virginia, on the newly completed Wellsburg, Bethany, and Washington Railway Company (the trolley). The building is 95 feet long and 45 feet wide and contains 11,750 square feet.

In 1905, Andrew Carnegie, the great steel magnate and philanthropist, offered to give Bethany College $20,000 for a new library if the college could find matching funds. Construction began in April 1906 and was announced as complete by the Board of Trustees on June 8, 1908. There is no record of the architect, but President T. E. Cramblet announced to the Board of Trustees on June 8, 1908 that the college had saved about $5,000 by building the library itself. [Special thanks to Council of Independent Colleges, Historic Campus Architecture Project]
Posted by markomundo at 2:45 PM No comments:

1901 --Arrangements were completed with Mr. Andrew Carnegie for $35,000 to build a new library building
Aug. 1, 1904 --Work completed on new building made of Indiana Bedford stone in a classic style of architecture. The library had 14,500 volumes and loaned 30,000 volumes annually.

Inscribed over the windows: Emerson; St. Paul; Homer, and Shakespeare.
Posted by markomundo at 2:34 PM No comments:

Email ThisBlogThis!Share to TwitterShare to FacebookShare to Pinterest
Labels: Carnegie, IN, Indiana, Logansport

Posted by markomundo at 2:22 PM No comments: