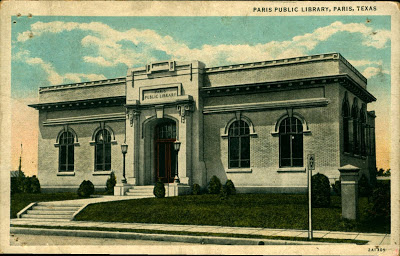 [LIB6681] With a generous contribution by Mr. And Mrs. J. J. Culbertson, the library moved into its own building on South Main Street in 1932. Mr. Culbertson donated the land and financed the $50,000 building, which was to serve as both a library and art gallery. Local labor and materials were utilized whenever possible which was a boon to the area economy. The collection included both adult and juvenile titles and works of art including paintings and statuary on loan from the Culbertsons. [Read more at the Public Library of Paris, Texas website]

US Postage Stamp - Paris, Texas by gregoryolney2
Design custom us postage stamps at zazzle.com
Posted by markomundo at 2:55 PM No comments: 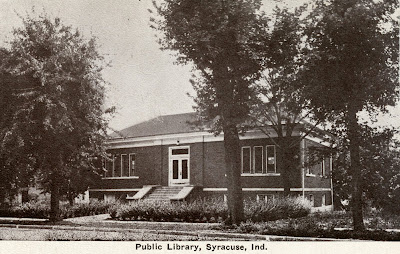 [LIB6680] An interesting note about the architecture: Recipients of Carnegie funds were encouraged to build in any architectural style they wished, but Carnegie did make two stipulations. One, there had to be a staircase leading up to the front doors. Carnegie believed that by climbing steps to enter a library, it represented elevation of mind by learning. Also, he wanted a lamp or lamppost outside of every library he helped to build, as he believed a lamppost symbolized enlightenment by learning. Carnegie also sent a portrait of himself to every library built with Carnegie Corporation funds, so that no one ever forgot their benefactor. The Syracuse Public Library still displays the portrait we received from Carnegie. Read more interesting facts on the Library Website!
Posted by markomundo at 3:50 PM 1 comment: 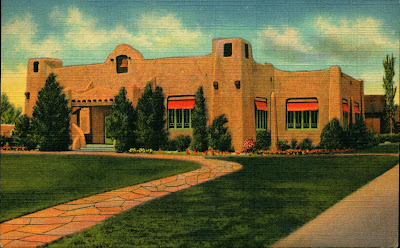 [LIB7045] May 1, 2011, marked the 110th anniversary of the day municipal public library service began in Albuquerque! Read more of the history of this library here.

Albuquerque, New Mexico - University of NM Poster by LanternPress
See other Greetings Posters
Posted by markomundo at 4:10 PM No comments:

Parlin Library, Everett, Massachusetts Postcard by markomundo
You can sell greeting cards , invitations, stamps and more on Zazzle.com!
Posted by markomundo at 3:45 PM No comments: 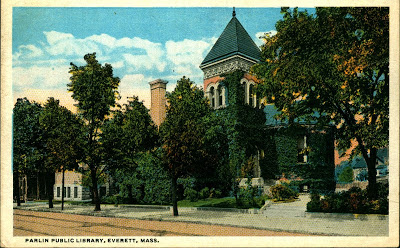 [LIB7063] The Frederick E. Parlin Memorial Library was erected as a memorial to the son of Albert Parlin, a local businessman who lost his son Frederick in 1890. John Spofford was selected as the architect to design the new library. The building was constructed in Richardson Romanesque style and opened to the public on September 17, 1895. In 1911 plans were drawn up for an addition to the library, and again Mr. Parlin donated $6,000 towards the construction. John Spofford was once again the architect. Through the years, Mr. Parlin donated generously to the library. In 1924, he established the Frederick E. Parlin Memorial Fund. Over the years the interest from this fund has been used to purchase many items for the library. By the 1940's, the Library had outgrown the building, but it wasn't until 1982 that a plan was set in motion to renovate the original building and to construct an addition. CBT/Childs, Bertman, Tseckares was chosen to draw up the architectural plans. Ground was finally broken in the spring of 1990. With construction of the new addition, the building is almost three times it's original size and handicapped accessible. The library has received awards for the skillful combination of an historic building with new construction from the Boston Society of Architects and was one of eight libraries to receive the 1993 Building Award of the American Institute of Architects and the American Library Association. When the new building opened in November 1991, it was completely automated and is a member of NOBLE, the North of Boston Library Exchange. [Thank you to the Parlin Memorial Website]
Posted by markomundo at 3:16 PM No comments: 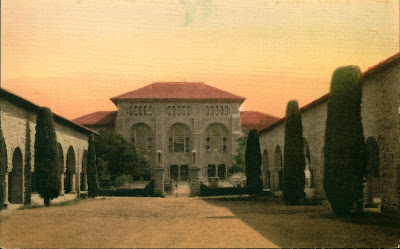 Columbia Library Columns was published from 1951 to 1996. Over the years contributors included faculty, University administrators  writers, historians and collectors, as well as Columbia librarians. Articles focused on individual collections, special acquisitions, literary topics and issues relating to the growth of Columbia's libraries and special collections generally.

'via Blog this'
Posted by markomundo at 2:41 PM No comments: 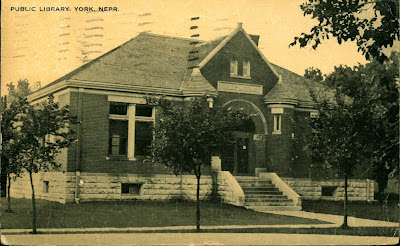 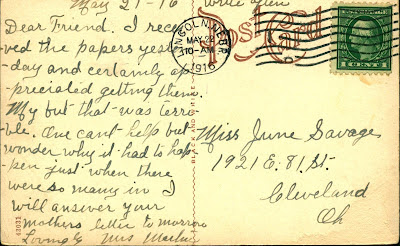 [LIB7061] - Addressed to Miss June Savage, Cleveland, Ohio. The next major milestone in the library’s history was Mrs. Lydia Woods’ bequest to build a public library and purchase books. The building opened in the fall of 1902. With several remodelings and a 1931 addition, the Woods library building housed York’s public library for the next 8 decades. [Website]

1872 poster advertising land for sale to postcards by corbisimages
View other English text Postcards
Posted by markomundo at 1:06 PM No comments: 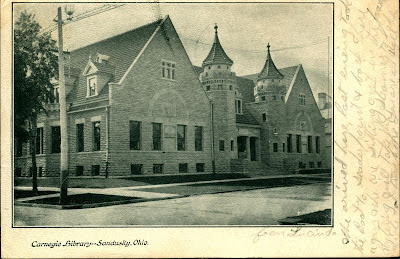 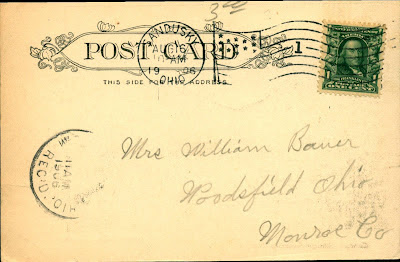 [LIB7060] - addressed to Mrs. William Bauer, Woodsfield, Ohio. The Carnegie Library in Sandusky, Ohio is a building from 1901. It was listed on the National Register of Historic Places in 1975. [Wikipedia]
Posted by markomundo at 1:01 PM No comments: 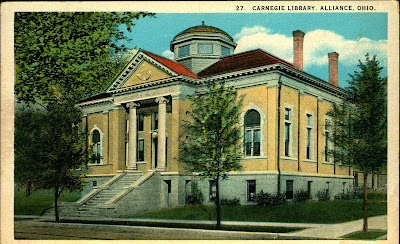 Greetings from Alliance, Ohio Postcards by feedmelinguini
Create a Post card with zazzle.com
:
Posted by markomundo at 11:39 AM No comments: 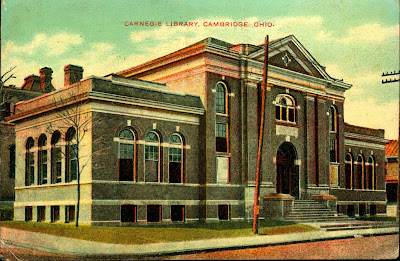 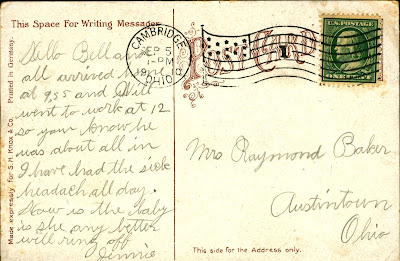 [LIB7058] The present Main building opened in November 1904. Andrew Carnegie provided funds for construction; the City of Cambridge had to provide land, books and promise to set aside funds for operating expenses.

Elizabeth Public Library marks centennial with open house, 100-year-old items | NJ.com: ""On entering the building the superiority of the structure is at once apparent," the article says of the yellow brick building’s entryway with built-in cast-iron bookshelves and light fixtures hung from high-arched ceilings."

Elizabeth T-Shirt by Home_and_Away
Make my own t shirt at Zazzle.
Posted by markomundo at 7:11 PM No comments: 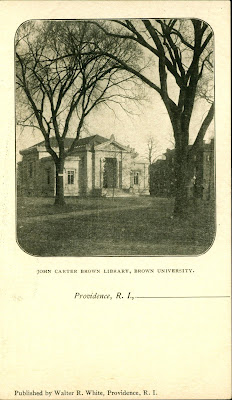 [LIB7046] The scholarly value of the Library’s collection is extraordinary partly because its origins go back to a time when systematic book collecting around a historical theme was a rarity. Although the Brown family had been acquiring books since early in the eighteenth century, the present collection was not fully launched until the mid-nineteenth century when John Carter Brown (1797–1874) began avid pursuit of Americana, an area of interest he termed “the Great Subject.” His son, John Nicholas Brown (1861–1900), actively continued this tradition and before his untimely death had conceived the idea of giving the Library to the world of historical research as a memorial to his father. In his will, John Nicholas Brown assigned funds for the construction of an appropriate building and for an endowment to support the Library’s work. The original Library building was formally dedicated in 1904. In 1990, the Library raised the capital to construct a 15,000 square foot addition, designed in the classical style like the original structure and named the Caspersen Building. [Thank you to Brown, this information can be found here] 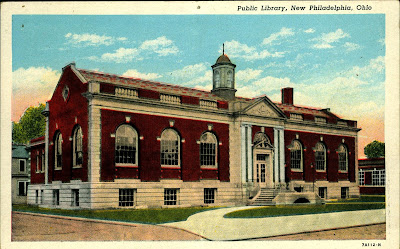 [LIB7045] - This building is still in use as a public library. Visit their website.
Posted by markomundo at 11:26 AM No comments: