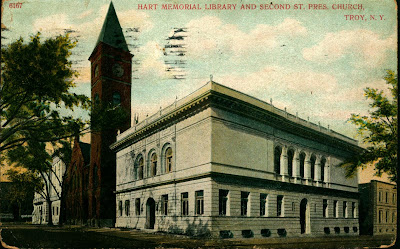 [LIB6653] - The building opened on May 12, 1897 with appropriate ceremony and fanfare. Unfortunately, needed operating support did not match the grandeur of the new library. Mary E. hart presented the sum of $5,000 on the condition that if another $45,000 was raised, she would contribute an additional $5,000. The necessary funds were never raised and under the special conditions of the gift, the original $5,000 reverted to her estate. In 1903 the Trustees voted to change the name of the institution from the Hart Memorial Library to the Troy Public Library in hopes of attracting municipal funding. In 1904 the city of Troy appropriated $2,500 toward the operation of the library, all of which went to pay off a deficit. [Read more about this library] The building, having undergone extensive restoration, is still in use as a public library. This panoramic view of the city of Troy, New York was originally produced by Beck & Pauli in 1881. The map identifies the street names and shows the buildings in Troy more than a century ago. The printed detail is outstanding.

Troy, NY Panoramic Map - 1881 Poster by lc_maps
Browse for more artwork prints
Posted by markomundo at 11:37 AM No comments: 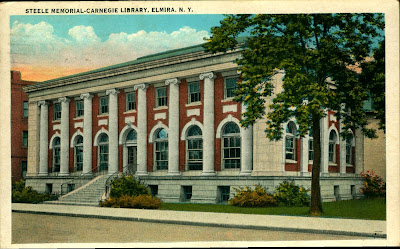 [LIB6652] - Esther Steele wasn't content just to build a building. Records indicate that a majority of the 6,779 volumes came from the Steele's personal library on W. Clinton St. Further, she recognized the need for a professionally trained librarian to maintain it and recruited her niece, Kate Deane Andrew to be it - but not before asking the Chancellor of Syracuse University to design a training program for Kate and having her spend two years in it. Kate began work in the Steele library in 1900 and retired in 1940! [Read more of the history of this library] 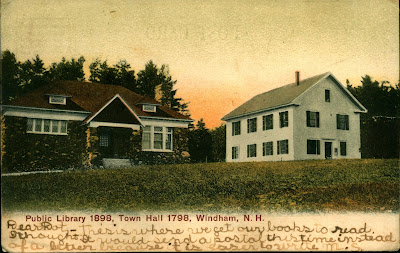 [LIB6651] - The Nesmith Library collection was created with the assistance of Col. Thomas Nesmith and was housed in the Town Hall until 1899 when the current field stone building was built by George W. Armstrong. See a digitized form of the Dedication Exercises of Armstrong Building from 1899, click here.

Searles Castle Photography Postage by pamdicar
Make postage stamps on zazzle.
Posted by markomundo at 11:16 AM No comments: 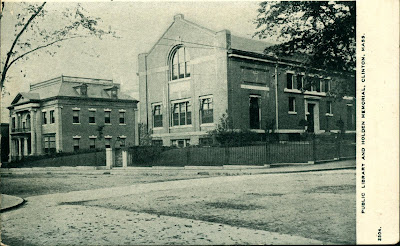 [LIB6650] - The Bigelow Free Public Library is named in honor of Erastus Brigham Bigelow, its greatest benefactor. Originally known as the Bigelow Mechanics Institute, it was founded in 1846, as a subscription library. The name evolved to the Bigelow Public Library, with its collection housed, at various times, in several municipal buildings. 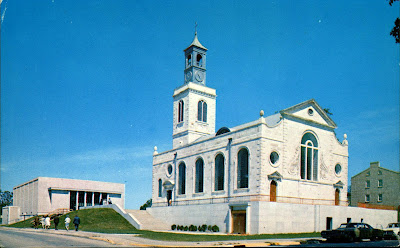 [LIB6649] - The Museum is located on the Westminster College campus in Fulton, Missouri, the site of Churchill's famous "Iron Curtain" speech. The Museum was founded in 1969 to honor the life and legacy of one of the greatest leaders of the twentieth century. [Website]

You have enemies? poster by DrQuote
Get the best large format printing from Zazzle.com.
Posted by markomundo at 9:03 AM No comments: 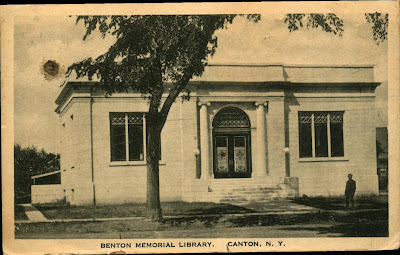 [LIB6647] - Mrs. Emma P. Benton was visiting her husband's family in Canton in 1907 and was sympathetic with the Association's desire for a library building. She offered $21,000 for a library building and $13,000 to endow it for maintenance and insurance. The building was to be known as the Benton Building to honor her husband. The Village of Canton provided the land. After the building was completed, title was transferred from Mrs. Benton's name to nine trustees of the Benton Library "to create, continue and maintain upon the premises a public library to be conducted for the benefit of the residents of the Village of Canton…" [Read more at the library website] The original building, with an addition, as still used as a library. 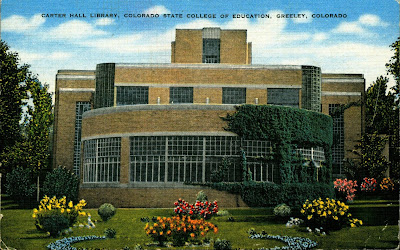 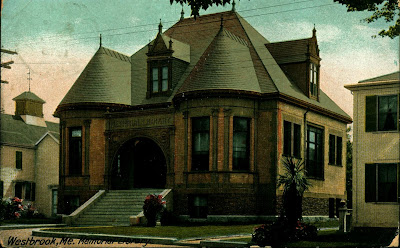 [LIB6645] - The Walker Memorial Library was placed on the National Register of Historical Places on November 10, 1980 and was registered as a Greater Portland Landmark in 1994. The Library now houses a Local History Room and a Gathering room in the original part of the library where the beauty and planning of the original designers is still evident. The Walker Memorial Library has remained a jewel in the downtown area of Westbrook for 116 years; its beauty unsurpassed in any other building in the City. We now face the possibility of losing this building…is this what the citizens want? Visit The Westbrook Historical Society webpage! A classic image from Zazzle's extensive collection of over 3,200 panoramic photographs, depicting iconic scenes from all fifty states. This commemorative poster print features a reproduction of an original panoramic photograph of the Westbrook Seminary in Portland, Maine, taken in 1906. 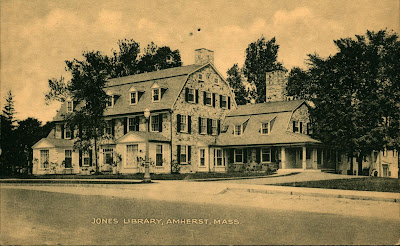 [LIB6644] - The Emily Dickinson Special Collection - Emily Dickinson, one of the world's foremost poets, was born on December 10, 1830, the daughter of Edward and Emily Norcross Dickinson of Amherst, Massachusetts. While much is made of Dickinson's reclusive nature, she did spend a year at Mount Holyoke Female Seminary, traveled to Washington, D.C., and stayed several months near Boston for health reasons. Though she wrote many letters, notes, and poems to her friends and neighbors, very few were published during her lifetime and all were published anonymously. It was only after her death on May 15, 1886 that Emily Dickinson became widely known as a poet. This collection is unique among other Dickinson collections because it places the poet within the context of her community in Amherst, Massachusetts during the mid-nineteenth century. The collection consists of approximately 7,000 items, including original manuscript poems and letters, Dickinson editions and translations, family correspondence, scholarly articles and books, newspaper clippings, theses, plays, photographs, and contemporary artwork and prints. Visit this special collections website! [LIB6643] Summer is monsoon season in New Mexico. This photo exemplifies that time of year. This is taken from the peak of the Sandia Mountains, overlooking Albuquerque. Here you clearly see why New Mexico is the land of enchantment.

Monsoon over Albuquerque Print by Mattt513
Create own posters at Zazzle.
Posted by markomundo at 2:51 PM No comments: 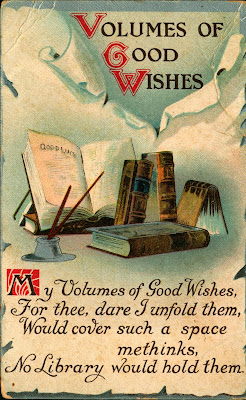 [LIB6642] - A nice vintage postcard. Not exactly what I usually post but I like the sentiment.
Posted by markomundo at 2:46 PM No comments: 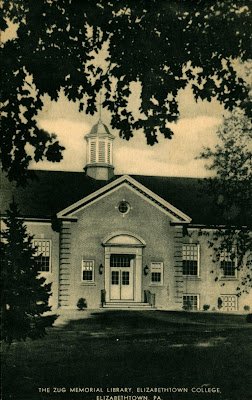 [LIB6641] - One of the concerns to be addressed for accreditation was a stipulation the College needed to build a library commensurate with its educational goals and aspirations. A fund- raising effort was initiated, and on April 9, 1949, ground breaking began on the new library. At a cost of $160,000, the Zug Memorial Library was dedicated on October 20, 1950; named in honor of Samuel R. Zug, one of the founders of Elizabethtown College. The new facility had capacity for 50,000 volumes, even though in 1950 there were only 16,500 volumes in the collection. The building is no longer in use. It has been replaced by the High Library, built in the 1980s.

Elizabethtown Pennsylvania City Classic Mug by cityshirt
Create a coffee mug at zazzle.com
Posted by markomundo at 2:41 PM No comments: 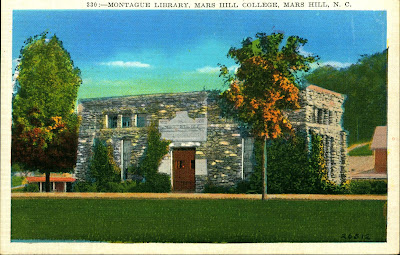 [LIB6640] - Mars Hill College was founded as the French Broad Baptist Institute in Madison County in 1856, in the days leading up to the Civil War. Shortly thereafter, the name was changed to Mars Hill College, inspired by Acts 17:22, which said, “Then Paul stood in the midst of Mars’ hill and said, ‘Ye men of Athens, I perceive that in all things ye are too superstitious.’” The college was chartered by the State of North Carolina in 1859 following its founding by some dedicated but struggling local families who wanted their children educated and instructed in the Baptist faith. [From the website]

Keep in touch with Zazzle custom postcards! Add your favorite image to a blank postcard or say “hi” with a pre-existing design. Save paper and mail a note without wasting envelopes!

Library, Quincy, IL 1914 Vintage by markomundo
View more Library Postcards
[LIB6639] - "The Quincy Library, the only public library legally established here under the laws of the State, was organized in the year 1837. There were one or more attempts at establishing a library here prior to 1837, but there now remains no trace of them. The Quincy Library, now over forty-four years old, it is hoped has already laid a foundation for a popular and valuable institution yet to grow up among us. Seeing the short-lived nature of most voluntary societies which have sprung up here, and after a brief period have died in their infancy, never passing their period of "dentation," we may reasonably hope that the Quincy Library, now forty-four years of age, may meet with many friendly hands to help prolong its life and with enlarged usefulness. Among the early friends of the Quincy Library I must mention Samuel Jonas, who was its President for many years, and even in his last will and testament did not forget it." [Reminiscences of Quincy, Illinois: containing historical events, anecdotes, matters concerning old settlers and old times, etc (Google eBook)]
Posted by markomundo at 2:27 PM No comments: 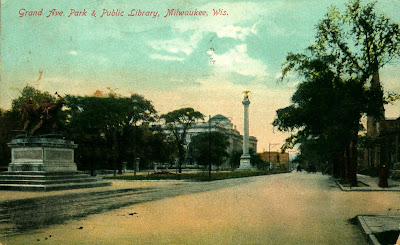 [LIB6638] - Beautiful vintage postcard shows Grand Ave. Park and the library in the background.
Posted by markomundo at 2:17 PM No comments:

Valley Rd., Upper Montclair NJ 1911 Vintage by markomundo
Get the best in online postcard printing at zazzle
Posted by markomundo at 2:05 PM No comments: 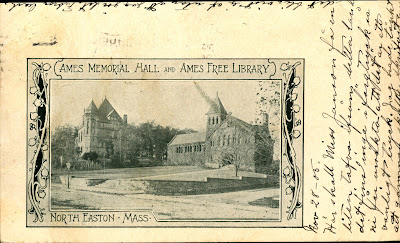 [LIB0119] - The Ames Free Library first opened its doors in 1883. Under the terms of the will of Oliver Ames II, $50,000, in trust, was left for the construction and support of a Library for the benefit of the inhabitants of Easton MA. Fifteen thousand dollars of this amount was designated for a permanent fund, the income of which shall be devoted to increasing the library and keeping the building, its appurtenances, and contents in repair. [Read more about this library at their website.]

Ames Free Library ~ case by Andy2302
Design a unique custom iPhone 3gs case online at Zazzle.
Posted by markomundo at 11:28 AM No comments:

1876 New Bedford, MA Birds Eye View Panoramic Map by PaperTimeMachine
Build your own poster at Zazzle
Posted by markomundo at 10:55 AM No comments:

Colchester Connecticut City Classic by cityshirt
View other United states Mugs
Posted by markomundo at 10:41 AM No comments:

Cat and Dog in the Library

Adorable Vintage illustration of a dog reading and a cat writing in the library. Great for a teacher, librarian or a special reader. Give as reading contest gifts.

Cat and Dog in the Library by msdespina
More Reading Postcards
Posted by markomundo at 4:15 PM No comments: