Posted by markomundo at 1:51 PM No comments:

Posted by markomundo at 1:48 PM No comments:

Founded in 1848, by an act of the Great and General Court of Massachusetts, the Boston Public Library (BPL) was the first large free municipal library in the United States. The Boston Public Library's first building of its own was a former schoolhouse located on Mason Street that was opened to the public on March 20, 1854. The Library's collections approximated 16,000 volumes, and it was obvious from the day the doors were first opened that the quarters were inadequate. In December of that same year the Library's Commissioners were authorized to locate a new building upon a lot on Boylston Street. The present Copley Square location has been home to the Library since 1895, when architect Charles Follen McKim completed his "palace for the people." [LIB2656]
Posted by markomundo at 12:40 PM No comments:

On Monday the new Pruyn library, an auxiliary of the Young Men's Association Library, will be formally opened to the public. The building occupies the site on the corner of North Pearl Street and Clinton Avenue of the house in which the late John V.L. Pruyn, Chancellor of the university, was born in 1811. [NY Times, April, 1901]
Posted by markomundo at 12:36 PM 4 comments:

Posted by markomundo at 12:33 PM No comments:

The Rutland Free Library was started in 1886. Originally housed in various storefronts and at the old Memorial Hall on West Street, the library has been located in the old courthouse and jail on Center Street since the 1930s. In 1965 an addition was built to expand the capacity. In 1990 a second addition was completed, making a total of 24,167 square feet available including meeting rooms, book stacks, reading rooms, administrative offices, and storage. [SOURCE] [LIB2653]
Posted by markomundo at 12:26 PM No comments:

The story of the Folger Shakespeare Library is intrinsically linked to that of its founders, Henry Clay Folger and his wife Emily Jordan Folger, who established the Folger in 1932 as a gift to the American people. Emily Folger later wrote of Henry Folger’s belief that “the poet is one of our best sources, one of the wells from which we Americans draw our national thought, our faith and our hope.” The Folger is located in the nation’s capital for that reason. [SOURCE]
[LIB2651]
Posted by markomundo at 12:22 PM No comments:

The Ilsley Public Library has a colorful history that dates back to the 19th Century. They have several time lines to illustrate this history. The first provides a brief glimpse of the major events that have shaped the library over the years. The other time lines provide more detailed information from institutional records, which portrays not only the development of Ilsley Public Library, but also of libraries in general and their relationship to small-town life in America. [SOURCE] [LIB2650]
Posted by markomundo at 12:18 PM No comments:

The Pillsbury Library opened in 1904 at 100 University Avenue SE in Minneapolis. It closed as a library in 1967, and housed several different businesses over the years, most notably Dolly Fiterman Art Gallery. [LIB2649]
Posted by markomundo at 12:14 PM No comments:

Another postcard sent to me by a postcrosser, Eduardo. Thanks for the wonderful card! 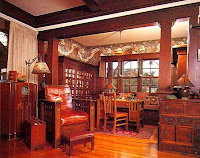 Sent to me by a postcrosser, Eduardo. Thanks!

Posted by markomundo at 2:13 PM No comments: 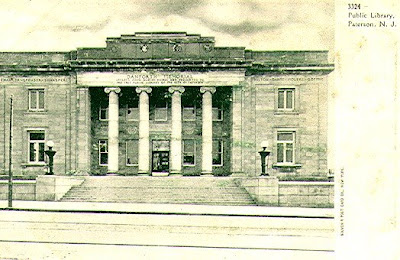 Mary Danforth Ryle was born in Paterson, New Jersey, on 8 January 1833, the daughter of Charles Danforth, the designer and manufacturer of the first coal-burning locomotive engine. A veteran of the War of 1812, Charles Danforth was also known for his patented invention, that of the Danforth Spindle, a cotton spinning frame.
Mary Danforth married William Ryle of Macclesfield, Cheshire, England, reputed to be the largest and wealthiest silk importer in the United States. William Ryle was the nephew of John Ryle, the "Father of the U.S. Silk Industry" in Paterson.
Throughout her life, Mary Danforth Ryle was always philanthropic. After her father's death, Mary Ryle donated the residence of her father to the city of Paterson to be used as the city's first library. She provided the funds to alter, furnish and equip the new institution. After the catastrophic fire of 1902, in which much of downtown Paterson was destroyed, including the Danforth Library, Mary Ryle once again donated the funds necessary to build the new Danforth Memorial Library located on Broadway in Paterson. Ryle contracted with Henry Bacon, who designed the Lincoln Memorial to build the new city library. The Danforth Memorial Library is perhaps the most notable and beautiful public buildings in the city of Paterson. Mary Danforth Ryle was so loved by the citizens of Paterson that at the time of her death, the funeral was one of the largest the city had ever seen. Mrs. Ryle was buried at Cedar Lawn Cemetery, the resting place of Paterson's elite. [WIKIPEDIA] [LIB2431]

Posted by markomundo at 8:25 PM No comments: 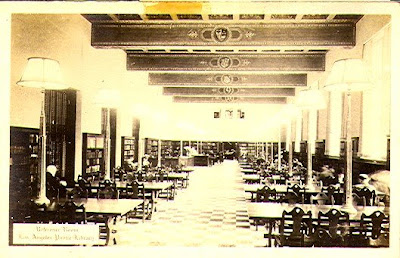 Read about the art & architecture of the Los Angeles Central Library here. [LIB2423]


Posted by markomundo at 8:05 PM No comments: 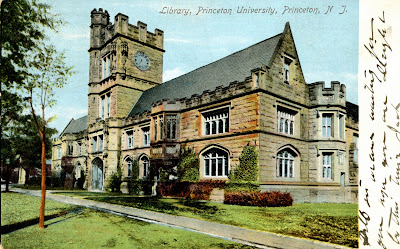 Posted by markomundo at 8:02 PM No comments:

Sent to me by a postcrosser, Dominik! Thank you!

Three years after a fire destroyed much of the famous Anna Amalia library in Weimar, the books are returning to the shelves of the world-renowned Rococo gem. The UNESCO World Heritage Site is due to re-open on Oct. 24, 2007 [SOURCE]

The concept of establishing a public library service dates far back to the year 1806. During that year the first library committee was formed. Rules and regulations were published and any member of the public was allowed to take out on loan at any one time not more than three books. [SOURCE] [LIB2428]
Posted by markomundo at 7:34 PM No comments:

Email ThisBlogThis!Share to TwitterShare to FacebookShare to Pinterest
Labels: Malta

Posted to Birmingham, Alabama during WWII. "We have to gain the Victory. That is our taks." - The Prime Minister

The Enoch Pratt Free Library is Baltimore City’s public library. The main library houses an excellent assortment of books, magazines, newspapers and special collections. Among the treasures of the Pratt Library is the Amelia F. Poe collection of letters and documents relating to Edgar Allan Poe. (Amelia was one of two daughters of Edgar’s Baltimore cousin, Neilson Poe.) A fine selection of books about Poe are kept in the Poe Room, on the second floor. [SOURCE] [LIB2422]
Posted by markomundo at 7:19 PM No comments: 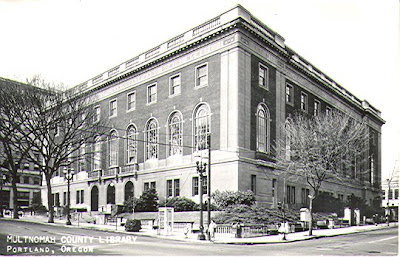 Multnomah County Library is the oldest public library west of the Mississippi, with a history that reaches back to 1864. [LIB2419]

Posted by markomundo at 1:36 PM No comments:

An older view and a contemporary view. Renamed Morehead State University. The library has also been renamed the Camden-Carroll Library and there appears to be a relatively new addition to the building (on the right).
[LIB2416]


The original part of the library was built in 1930 and officially opened
on January 22, 1931. It was named the Johnson Camden Library after U. S. Senator Johnson Camden.

It was designed to be the center of what is now the historical district of campus which is a crescent. Like all of the historic buildings on campus, the Library was designed by Joseph & Joseph Architects, and the architectural style is Collegiate Gothic. An interesting feature of the original building is the names of authors around the top of the building.

In 1964-65 a new addition was built on the west side of the original building. The 5 story Julian Carroll Tower was built in 1978. It was named for Julian Carroll who was the Governor of Kentucky at that time. In 1980, the library's name was changed to Camden-Carroll Library which combines the last names of both namesakes.
[Special thanks to Teresa L. Johnson, University Archives Specialist
Camden-Carroll Library
Morehead State University ]

Posted by markomundo at 2:13 PM No comments:

The park became the site of a new $1.2 main library facility in 1951. Two stories tall, with mezzanine levels, the marble clad building was airy and bright. The new building was the first central home for the city’s fledgling library system after several temporary venues in previous decades. Its location in the park, however, was unfortunate since it blocked the view of the bay from East Flagler Street. The outcry against the new building in the park prompted the state’s Garden Clubs to pressure the Florida Legislature to pass a law by the mid-1950s which prohibited the construction of additional structures in Bayfront Park. [SOURCE] [LIB2417]
Posted by markomundo at 2:05 PM No comments: 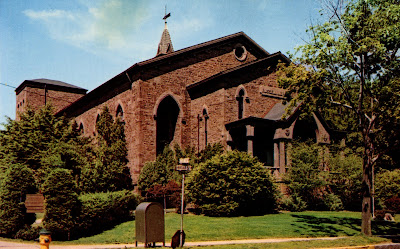 "Established 1875. The renovated building is the former Christ Episcopal Church, where the first public High School classes in Connecticut were conducted, and where Samuel Colt was married."

Frances Russell established Russell Library in 1875 in memory of her husband, Samuel. The Episcopal Church of the Holy Trinity had built the building on the corner of Broad and Court Streets in 1834, and Mrs. Russell purchased and remodeled it in the Roman Gothic Style. The building opened as the public library for the City of Middletown on April 5, 1876. In 1930, the City helped to add the Hubbard wing, and in 1972 completed the remodeled Children's Library, originally the First Federal Saving and Loan Association of Meriden, built in 1965. [SOURCE]

Posted by markomundo at 12:52 PM No comments:

The Bowers Mansion was built in 1863 by Lemuel "Sandy" Bowers and his wife, Eilley, and is the finest example of the homes built in Nevada by the new millionaires of the Comstock mining boom. [SOURCE] [LIB2411]
Posted by markomundo at 10:37 AM No comments:

Email ThisBlogThis!Share to TwitterShare to FacebookShare to Pinterest
Labels: maine, ME, South Paris 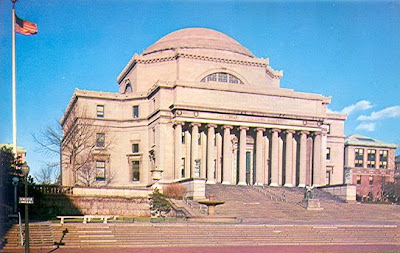 Posted by markomundo at 10:26 AM No comments:

Construction of the library began in 1901 and the library opened on January 28, 1904. The building is built with Indiana sandstone and boasts stately Greek architecture. The marble pillars, brick foundation, intricate wood carvings on the inside pillars, tiled mosaic floors, and thick walls truly make Moore Memorial Library an impressive structure. The Cynthia Raymond Room in the basement of the library was dedicated in 1980. A local history museum is located on the third floor. An addition in 2007 added a new teen and children’s area, computer lab, amphitheater and reading garden. The library was named by the first trustees of the library to honor the Moore family's generous gift to the village. Generations of villagers and visitors have admired and appreciated the majestic stone library, an august and beautiful reminder of the civic-minded Moores whose descendants still support the library through the Edward S. Moore Foundation. [SOURCE] [LIB2406]

Posted by markomundo at 10:11 AM No comments:

One of the many Carnegie financed libraries in the United States.

Sherburne Public Library was organized as part of the Sherburne Free Academy in 1838. In 1880 a new school building included a large room for the public library and contained 1,700 books. In 1885 New York State required all libraries to be separated from school libraries. On November 4, 1895 Sherburne Public Library began a legal existence. In 1909, with money from the Pratt family for the building and from D.H.G. Newton and others for the land, the library became a reality. The architect was Edward L. Tilton of New York City, and the master Workman was M. James Wilson of Rome, NY. The building was a gift to the town with the requirement that it only be used as a library. [SOURCE] [LIB2404]
Posted by markomundo at 9:59 AM No comments: