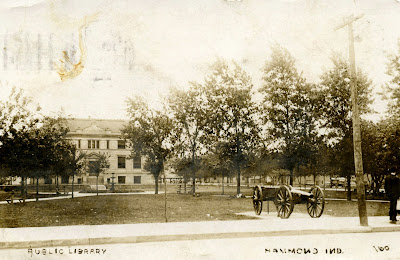 US Postage Stamp - Junction City, Kansas by gregoryolney2
Browse other Us Stamps

Posted by markomundo at 10:37 AM No comments:


[LIB6652] - Mr. Carnegie wanted his money to be used for “real and permanent good in this world.” One can only assume that Mr. Carnegie would be very pleased, that 102 years later what is now known as the Carnegie level of the library is used daily. The city commission room has been updated as well as the Malott room. Periodicals are now housed on the Carnegie level as is the microfilm reader in the genealogy room. A room formerly used as storage is now the Jordan Room, which is an ideal place for a group to hold a meeting or training. Tim Geske painted and restored the dome, making the Carnegie level breathtaking. Andrew Carnegie also thought his institutions should create “ladders on which the aspiring can rise.” If one thinks about the many Abilene citizens who have frequented the library during the past 102 years, it can be assumed that the library certainly has served this purpose and will continue to do so. [Read the history of the library here]
Posted by markomundo at 3:35 PM No comments: 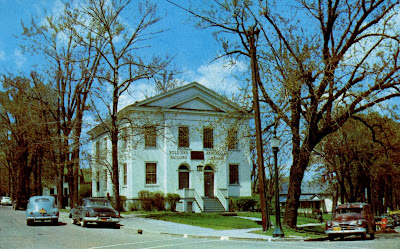 [LIB6651] - The Soldiers and Sailors Memorial Library Building, still in use as a public library.
Posted by markomundo at 3:13 PM No comments: 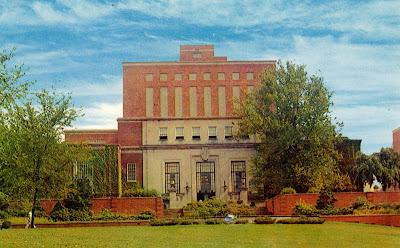 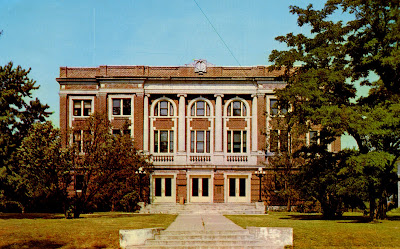 [LIB6649] - When Henry Solomon Lehr founded Ohio Northern University in 1871, he divided his personal library between two student groups, the Franklin Literary Society and the Philomathean Literary Society. These collections were kept in the societies' meeting rooms and were enlarged over the years. [read more history of this library here]
Posted by markomundo at 2:55 PM No comments:

Library, Columbus, Wisconsin Vintage by markomundo
Create your own postcards online at Zazzle.

[LIB6648] - The library was designed by master architects Louis W. Claude and Edward F. Starck in 1912. It achieved statewide architectural significance as one of the most original designs of a firm noted for its distinctive libraries. The library's one-story Prairie School design is built of stucco, wood and brick. Normally the building belongs in the general class of their Prairie works but the design is also strongly influenced by the English Arts and Crafts movement. The deliberate combination of stucco and brick and vaguely Tudor-like ornamentation is more closely related to the craftsman design philosophy of the Arts and Crafts movement. The cottage-like library was designed with a T-shaped floor plan featuring an open reading room, central circulation desk, with built-in benches and bookshelves made of oak and offices in the rear completed the building. The residential elements such as the front porch, residential setback, and flower boxes give it an inviting feeling. The library was dedicated on November 1, 1912 for the contracted cost of $9,888.10. The library has been in continual use since opening. [Provided by the library website]
Posted by markomundo at 2:43 PM No comments:

Library, Bogota, Colombia Vintage by markomundo
Design your own picture postcards on zazzle.


[Z6645] - The National Library of Colombia is generally considered to be the oldest national library in the Americas. It was founded at the end of the eighteenth century in 1777 by Viceroy Manuel De Guirior, who established the library in the city of Bogotá. [Wikipedia]

Posted by markomundo at 11:58 AM No comments:

Posted by markomundo at 11:10 AM No comments:

Library, Guilford, CT Vintage by markomundo
Shop for another postcard design from Zazzle


[Z6643] - Guilford has provided library services to its community in some form since 1737, when a library company was formed along with Saybrook, Killingworth and Lyme. A public library was formed in North Guilford around 1760. From 1790 to 1797 the First Society Library was formed, succeeded by the Guilford Library which operated until 1815. This was in turn followed by the Union Library, whose collection, like its predecessors, was comprised mainly of religious books. Several other libraries were active, most notably the Guilford Free Library, erected in 1891 across from 121 Whitfield Street with funds donated by E.P. Dickie. [Read more at the Website]

Posted by markomundo at 10:52 AM No comments:

Posted by markomundo at 10:36 AM No comments: 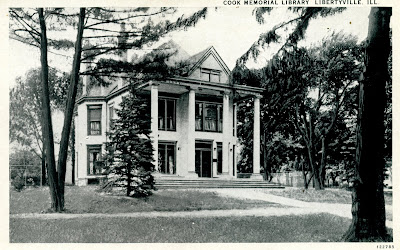 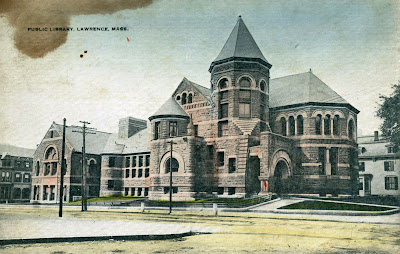 [LIB6633] - Hedge, Frederick H., for 27 years librarian of the Lawrence (.Mass.) Public Library, has resigned that office, and will retire from active professional work. Mr. Hedge was born in West Cambridge, Mass., June 30, 1831, and was graduated with honors from Harvard in 1851. His library experience began in 1855, when he was appointed assistant librarian of the Providence Athenaeum, a post he held for 14 years. From 1869 until 1872 he was librarian of the Massachusetts Historical Association, and in 1874 he was elected to take charge of the Lawrence Public Library, which under his direction has grown from 6000 volumes to its present collection of 50,000 v. He has been a member of the American Library Association since 1879. Mr. Hedge's resignation will take effect June 1. and he then expects to take up his residence in Brookline, Mass. [Library journal, Volume 26 (Google eBook)]
Posted by markomundo at 9:20 AM No comments: 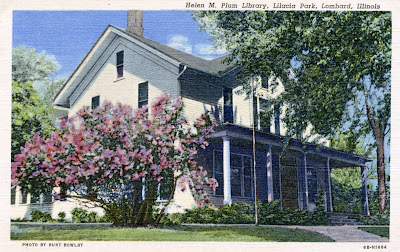 [LIB6632] - The library as well as Lilacia Park were gifts of the late Col. William Plum.
Posted by markomundo at 9:12 AM No comments: