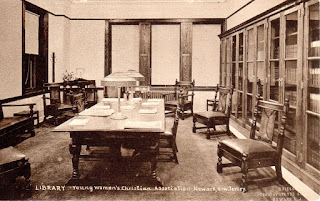 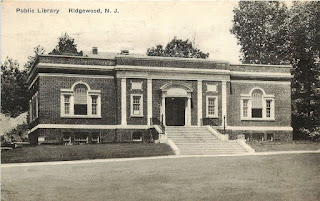 This stately Italian Renaissance-style library was built between 1921 and 1923. It is an excellent example of Palladian library design popular during the early 20th century. The funds for its construction were bequeathed by Gertrude Pease as a memorial to her father. She was the moving force behind a women’s group known as the “Village Improvement Association” that established Ridgewood’s first library in 1897, using donated books and rented rooms. According to the terms of the Pease bequest, the building was to be used as a library in perpetuity.

The Pease Library was Ridgewood’s main library until 1962, when the village opened a new library across town. For many years, the Pease Library served as a branch library, then briefly the central reference library while the main building was being expanded. When the main library reopened in 1998, the Pease Library was closed and the library board and village government successfully petitioned the court to void the deed restriction requiring that the building always be used as a library. Read more...
Posted by markomundo at 10:23 AM No comments: 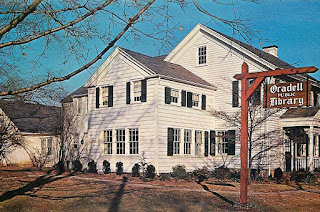 The first librarian was Miss Marie A. Skinner and she welcomed the first library patrons on the afternoon of Tuesday, April 22, 1913.  Read more...

I Love Oradell New Jersey Classic White Coffee Mug by cityshirt
Design mugs online at Zazzle
Posted by markomundo at 10:18 AM No comments: 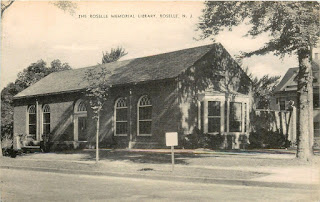 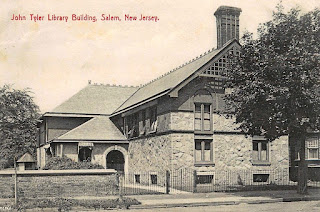 Built as the John Tyler Library in 1888, the building is located in the middle of the Broadway Historic District on one of the two original streets laid out in 1675. The library skillfully combines the Romanesque Revival and Queen Anne styles in terra cotta and brick, and is attributed to Philadelphia architect George Hewitt. Originally incorporated in 1806 as "The Library Company of Salem" this was the second library established in New Jersey. Read more...

Salem County, NJ Postage Stamp by davidrumsey
Order stamps by mail at Zazzle
Posted by markomundo at 10:05 AM No comments: 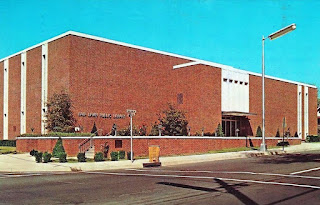 Posted by markomundo at 9:57 AM No comments: 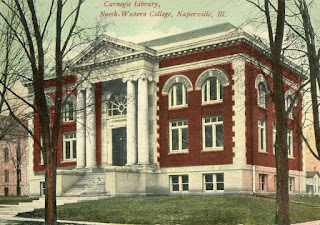 In the early 1900s College President Herman J. Kiekhoefer and Judge John S. Goodwin initiated contact with philanthropist Andrew Carnegie to seek out funds for new facilities on campus. Carnegie agreed to donate $25,000 (approximately $679,059 in the current consumer price index) to then North-Western College for a new library building. Carnegie Library, as it was formerly called, was one of only a few academic libraries in Illinois that received funding from Carnegie. The building still exists on campus today and is now known as Carnegie Hall.

Naperville, IL City Limits Sign Tshirts by city_limits
Put unique pictures on shirts online at zazzle.com
Posted by markomundo at 9:15 AM No comments: 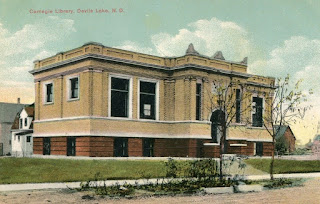 Vintage South Dakota Travel Postcard by VintageTravelCards
Look at Vintage Postcards online at Zazzle.com
Posted by markomundo at 9:11 AM 1 comment: On July 6, 1904, the Carnegie Library of Oil City opened its doors with 5,000 books that were donated by the Belles Lettres Club. Read more...

1884 Oil City Pennsylvania Baseball Classic White Coffee Mug by worksburg
Look at other 1884 Mugs at zazzle.com
Posted by markomundo at 9:04 AM No comments: 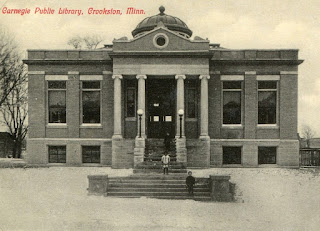 The Crookston Carnegie Public Library is a one storey Classical Revival style building with a raised basement of dressed stone. The building is faced with buff-colored pressed brick and has a flat roof with a paneled brick parapet. The main facade has rectangular windows located between brick pilasters and is dominated by a central projecting portico. The portico consists of a pediment supported by four free-standing Ionic columns. Three ornamental stone pieces sit atop the pediment and the tympanum of the pediment has a round window with a garland motif surround. The entablature is also decorated with the words 'Carnegie Public Library' inscribed in Gothic style lettering on the architrave. The small central dome that was topped with an orb-shaped finial has since been removed. Read more...

Posted by markomundo at 9:00 AM No comments: 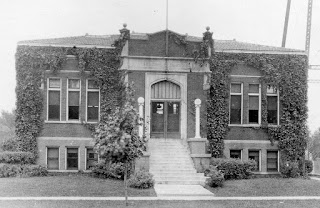 I Love SPIRIT LAKE Iowa Classic White Coffee Mug by cityshirt
Design your own customized coffee cups at Zazzle
Posted by markomundo at 8:53 AM No comments: 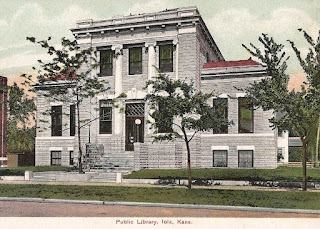 Iola is lucky in that the library board requested Lewis Henry Wishard to write a history of the library.  He did so, and this book preserves much library history that might otherwise have been lost.  The library has several copies of this volume, which he wrote in 1929, with some supplements up through 1934.  Mr. Wishard was the first president of the library board when the library became a free public library in 1905.  He served on the library board for approximately 30 years, most of the time as its secretary.  He was evidently a rather curmudgeonly sort, and his droll humor and caustic remarks make the book much more entertaining reading than you might imagine. 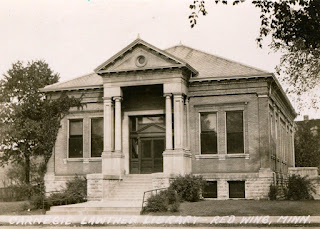 On December 14, 1901 the city of Red Wing secured $15,000 from Carnegie to build the Carnegie-Lawther Free Library. This initial sum was then raised to $17,000 to complete the building. The name 'Lawther' in the library's title recognises James Lawther who donated the land to the city in memory of his son. Plans were prepared by architect A.F. Gauger and the contractor was W.J. Longcor. The library was dedicated and opened on October 24, 1903.

While the Carnegie grant was used to construct the building, the Red Wing community had to provide a suitable site and were expected to tax themselves at the annual rate of 10% of the grant amount. This requirement imposed by Carnegie ensured a long-term commitment for the purchase of books, staff costs and maintenance of the library building.

With the need for expansion, the city of Red Wing determined the Carnegie building could not be remodelled or expanded. The Carnegie-Lawther Free Library was demolished in 1968 and the new public library was completed in 1969.
Posted by markomundo at 11:27 AM No comments: 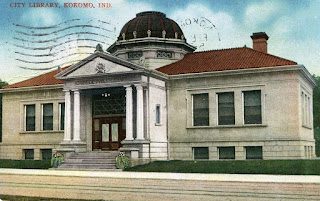