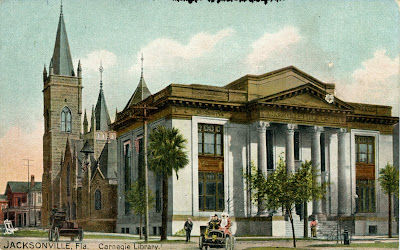 [LIB6694] - Currently used as law offices. Formerly the main headquarters of the Jacksonville Public Library System, the building is listed on the National Register of Historic Places and was designed by New York architect Henry John Klutho in the Neo-Classic Revival style. On October 3, 1903, ground was broken for the Carnegie library on the northeast corner of Adams and Ocean. Two years later, on June 1, 1905, the library was formally opened with George B. Utley as librarian and with 8,685 books available. Known officially as the Jacksonville Free Public Library, it was the beginning of the Jacksonville Public Library. It was also the first tax-supported library in Florida. [Waymarking]

Jacksonville Florida in 1876 Post Cards by PaperTimeMachine
View other Jacksonville Postcards
Posted by markomundo at 1:21 PM